Definitions: Towers and Masts: In engineering terms, a tower is a selfsupporting structure while a ma

Definitions: Towers and Masts:
In engineering terms, a tower is a self­supporting structure while a mast in supported by stays or guys.
The terms “tower” and “mast” are often used for the same type of structure, which of course can cause confusion. Tower and mast have different definitions in American and British English. In American English, both types of structures are often called towers, while in British English, people always use mast instead.
To avoid this confusion, in this unit we are using the engineering terms:
tower = self­supporting
mast = supported by stays or guys.

Types of towers and masts:

This section presents the three most common types of towers/masts that are used today in wireless communication; self­supporting tower, monopole and guyed mast.

Monopoles are hollow tapered poles made of galvanized steel They are constructed of slip jointed welded­tubes and can be up to 200 feet (60m). Due to its construction, they are expensive to manufacture but simple to erect.
Monopoles are primarily used in urban environments where there is limited space available for the footprint2 of the tower base. The maximum footprint of a 200 feet monopole is approx. 6x6 feet (2x2 m) 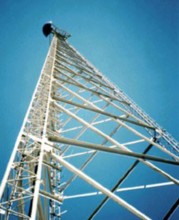 A self supporting tower (free­standing tower) is constructed without guy wires. Self supporting towers have a larger footprint than monopoles, but still requires a much smaller area than guyed masts.
Due to its relatively small footprint, this kind of tower is commonly seen in cities or other places where it is short of free space.
Self supporting towers can be built with three or four sided structures. They are assembled in sections with a lattice work of cross braces bolted to three­four sloping vertical tower legs.
The wider the base of the tower is, the larger antenna load is acceptable. 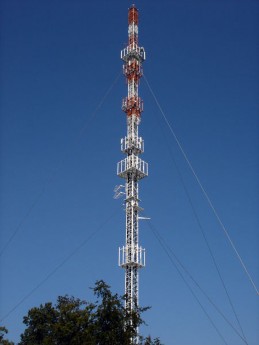 A guyed mast is secured with guy wires that are anchored in a set of concrete bases on the ground.
A guyed mast consists of identical three­sides section (approx. 10 ft (3m) each) that are stacked upon each other. Unlike monopoles for example, the guyed masts do not taper as they rise, since each section has the same width.
As a result of the guys, this kind of mast has a large footprint. On the contrary, guyed masts can be higher than non­guyed towers and allow larger antenna load.
A guyed mast is ideal for most communication needs, including wireless Internet, cellular and antenna radio towers.

The company introduces American design software PLS-Tower and PLS-Pole, which can design various transmission towers and telecom towers according to American standards and IEC standards. The monopole and lattice steel tower designed and processed by the company have passed the type test (tower structure load test) of China Electric Power Research Institute at one time. Our goal is to strive to provide customers with satisfactory products and services.
▲：Acceptance inspection of 750kV steel pipe frame
▼：How to choose a tower type 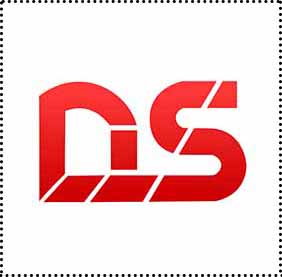 To get professional quotations, please email to us or submit the following sheet, we will contact you in 24 hours and pls check your emailbox. Your connection information will just be known by ourselves.